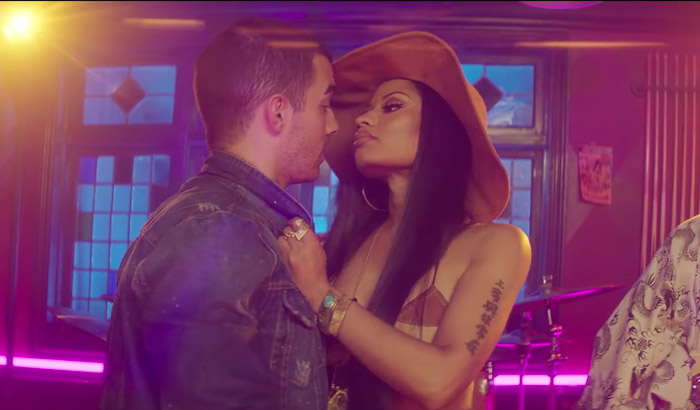 Nicki Minaj is putting in work. Fresh off the “After Dark” remix to Jason Derulo’s “Swalla,” the rap queen links up with DNCE in the group’s video for “Kissing Strangers.”

In the fun and flirty clip, the guys decide to throw a party. After stopping by a convenience store to buy some supplies (and make out with the clerk), they head to the house, where Jack Lawless is playing cards with a poodle and JinJoo is partaking in a game of spin the bottle.

Later on, they hit up a tavern where Nicki makes a grand entrance in a hat and bikini. She struts to the stage and grabs Joe Jonas by the collar, but stops shy of kissing him. But it’s not a total L because she leaves him with a signed photo…and her phone number.

The party rages on as confetti falls from the sky and the bartender keeps the drinks coming.

Watch the wild night unfold and stick around for the credits, which features snapshots from the evening.