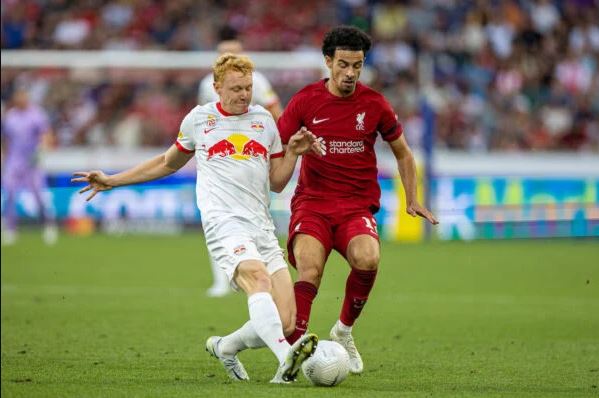 RB Salzburg vs Liverpool result -At the end of Liverpool’s final preseason match before their crucial matchup against Manchester City in the Community Shield, the Reds were defeated by RB Salzburg by a score of 1-0.

The Reds defeated RB Leipzig with a score of 5-0 the week before, but they were unable to break past a resolute defense at home in the second half of the match.

Benjamin Sesko put the home team in lead with a vicious finish after getting the better of Liverpool defender Ibrahima Konate on the break. This came after both Darwin Nunez and Harvey Elliott missed golden opportunities to put their teams in front.

At the Red Bull Arena, the Premier League giants experienced a frustrating night despite Jurgen Klopp’s decision to make a slew of substitutions in the second half of the match. The Salzburg goalkeeper Nico Mantl and his defense rose to the occasion and gave them a tough time.

The onslaught in Salzburg has shown how vulnerable the defense is without Van Dijk.

Konate and Joe Gomez had a difficult time coping with the quickness and deft movement of Noah Okafor, as well as match winner Sesko, despite the fact that RB Salzburg posed an occasional danger in the attacking third.

In Austria, Klopp gave his two younger central defenders the starting nod, and they had a less than stellar first half at the Red Bull Arena.

Gomez virtually took the blame for Sesko’s near miss after he made a weak header, and both he and Konate’s positioning and recovery pace were on display when it came to the Slovenian’s goal.