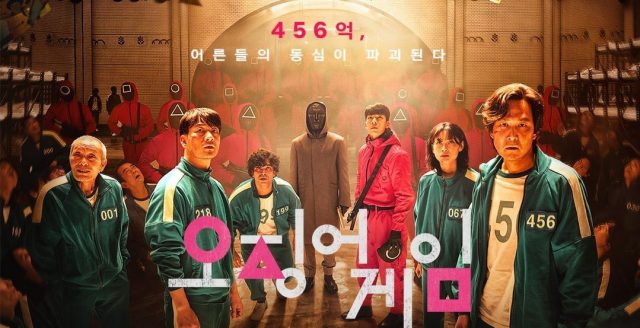 The most thrilling show of the year so far, the Netflix k-drama Squid Game has also become the streamer’s most surprising viral hit. The series follows adult contestants in a Battle Royale-type Game, with several rounds based off traditional Korean and global children’s games (like Tug of War and Red Light, Green Light). Though the death game premise has been done before (Battle Royale or The Hunger Games), the characters in Squid Game aren’t forced to play for survival. They’ve volunteered, gambling their lives on the chance to win $40.5 million dollars.

Squid Game quickly rose to no. 1 on the Netflix Top 10 after premiering September 17, where it has remained as it gets more and more buzz on social media. Though the show is not an easy binge, due to the graphic violence and heavy moral dilemmas, its excellent characters and terrifying games has viewers considering whether they would make it through the deadly competition, as well as just how much money a life is worth. In between telling everyone they know about the show, fans are also asking for a second season. Here’s what we know so far about a possible continuation of the hit thriller.

The Season 1 finale sets up a possible return.

The nine-episode series follows the Game from beginning to end, with the main hero, divorced dad Seong Gi-hun (Lee Jung-jae), winning the game after his childhood friend turned enemy, Cho Sang-woo (Park Hae-soo) sacrifices himself. In his shock and grief, Gi-hun refuses to spend the prize money for over a year. Eventually he learns that the old man he befriended and betrayed over the course of the Game, Oh Il-nam (Oh Young-soo), was secretly the mastermind behind it all.

After Oh Il-nam dies, Gi-hun discovers that the Game is still going on. While headed to the airport to visit his daughter, he runs into the Salesman (Gong Yoo) recruiting a new player. Instead of getting on the flight, Gi-hun walks away, vowing to stop the Game once and for all.

The vengeful ending leaves the story open for another installment, following Gi-hun as he goes against the wealthy masterminds behind the Game. Though Netflix hasn’t said anything yet, the show is listed as a seasonal series on the platform, not a limited one, showing a Season 2 is possible. Plus, Netflix does have a history of multi-season K-dramas. The historical zombie saga Kingdom and the high school romance Love Alarm both got two seasons.

Season 2 would likely have an entirely new cast.

TK Except for Gi-hun, all of this season’s players have died, including fan favorite Kang Sae-byeok (Jung Ho-yeon) and the secret mastermind Oh Il-nam. Whatever road the new season might follow, be it a new Game or an operation to take the whole enterprise down, Squid Game will need a new cast of characters.

Amid the many theories for Season 2, fans are speculating that another character besides Gi-hun may return. Police detective Hwang Jun-ho (Wi Ha-joon) spent the first season investigating the game from the inside while searching for his missing brother. It turned out that his brother was the Game’s masked Front Man the whole time, and last we saw of Jun-ho, he was falling off a cliff into the ocean after being shot by the Front Man.

Though Jun-Ho was left for dead, we never actually see his dead body be recovered from the water. The cop may have made it out alive, with an even stronger conviction to take down the deadly Game once and for all. If so, he could team up with Gi-hun in a new season. It might be a long shot, but this is a K-drama. Resurrections are generally a thing.

The filmmaker spoke with Variety about the process of writing Squid Game, which he first started developing in 2008. The K-drama was Hwang’s first series, and he said that writing it was harder than his usual work, taking six months to perfect the first two episodes. Though he did not confirm anything, he did share one hope for Season 2.

“I don’t have well developed plans for ‘Squid Game 2.’ It is quite tiring just thinking about it. But if I were to do it, I would certainly not do it alone. I’d consider using a writers’ room and would want multiple experienced directors.”

In the meantime, Hwang also told Variety that he may return to movies. He is currently developing a film called “KO Club,” short for “Killing Old Men Club,” which he describes as “a kind of inter-generational war premise.” Either way, we’re sure that the second installment would be worth the wait.