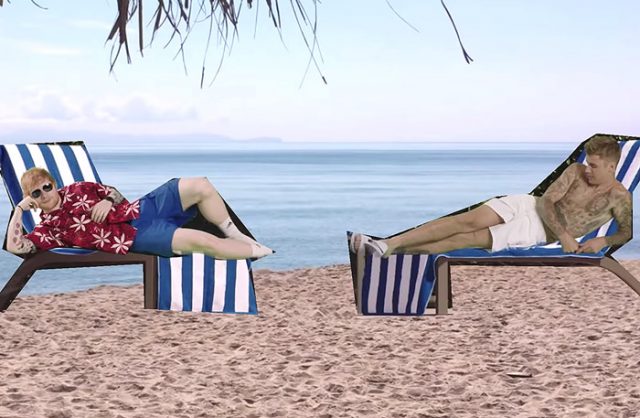 A week after debuting their collaboration, Ed Sheeran and Justin Bieber link up in the quirky and comical video for “I Don’t Care.”

Directed by Emil Nava, the CGI-filled clip was shot against green screen and finds the two superstars superimposed into random settings where they don’t fit in. In the opening scene, Ed dons a suit and tie at a party before changing into a panda costume and bathrobe. Bieber goes shirtless at a pool party before rocking ice cream, corn, and teddy bear costumes. Later, Sheeran stands at the altar next to a cardboard cutout of Bieber and they meet up wearing cowboy outfits.

“I Don’t Care,” which marks Ed’s first new single in over two years, has already broken the record for largest single-day streams on Spotify with just under 11 million streams in its first day of availability.